Object of the Game

The player or players with the most Bitcoins when the last card is Mined or Drawn from the deck wins the Game.

The player or players with the most Moon Tokens wins when playing To The Moon.

Each player chooses a Character and places it on the table in front of them.

The player whom can best describe a bLockchain takes the Dealer card, shuffles the remaining deck and deals two cards face-down to each player.

The player left of the dealer takes the first Turn. Play continues cLockwise.

The Three Phases Of One Turn

If your Character can Store more Bitcoins; you must draw one and only one card from the deck, look at it and Store it on your Character.

Then for each of your Exchanges that can Store more Bitcoins (from left to right and then top to bottom); you must draw one and only one card from the deck, look at it and Store it on your Exchange.

If you draw the last card in the deck during the Mining Phase; you must look at it and Store it, then the Game immediately ends (you cannot take your Draw or Action Phase).

You must put one and only one card into your hand. This card can either be drawn from the deck or taken from your Storage.

If you draw the last card in the deck during the Draw Phase; you must put the card into your hand, then the Game immediately ends (you cannot take your Action Phase).

You may do one and only one of the following:

Reveal one and only one card (but not a Skullduggery card) from your hand to all other players and then resolve the cards function.

Place a card from your hand into your Storage without Revealing it to other players. You must have Storage Capacity.

You must Reveal and place your Exchange card to the right of your Character. In future Turns you will be able to Mine Bitcoins to Store on this Exchange if you still have it.

When an Exchange has three Bitcoins Stored on it at the end of a Turn, it Locks.

Lawsuit, Hack and Smear Campaign cards (7 of each)

These cards have two functions. You must either Learn the Skill or Attack another player.

If you Attack; you must Target one and only one of another players Exchanges or Character.

If the Attacked player does not Reveal a Skullduggery card from their hand; the Stored Bitcoins are discarded from the Game. The Exchange card is taken to your hand if an Exchange was Targeted.

You must Target one and only one of another players Learned Skill cards for Attack.

If the Attacked player does not Reveal a Skullduggery card from their hand; the Skill card is taken to your hand.

You must Learn the Skills.

End of The Game and Playing To The Moon

The Game ends when the last card is Mined or Drawn from the deck. The player or players with the most Bitcoins wins the Game.

If you wish to play To The Moon; the player or players with the most Bitcoins take one and only one Moon Token each and the Dealer card is moved one player to the left.

Then then Game is played multiple times until either one or more players accumulate so many Moon Tokens that it becomes impossible for any other players to win or all of the Moon Tokens have been taken (if players wish to compete for second, third and fourth place).

The Character card face-up on the table in front of you is your Character. During the Game you will place Exchange cards face-up to the right of your Character, these are your Exchanges.

Cards from the deck placed face-down on the table (showing the bitcoin icon) are referred to as Bitcoins. At the end of the Game the player with the most Bitcoins wins the Game.

Cards from the deck placed face-up on the table are Revealed.

Bitcoins placed on top of Characters and Exchanges are Stored.

The number of Bitcoin icons printed in the top right corner of each Character and Exchange card represents the maximum number of Bitcoins that can be Stored by that card. This number is the Storage Capacity.

Characters and some other cards in the deck have Skill icons printed in the top left corner. Your Character can Learn Skills by tucking the card under the left side of the Character.

Each Turn has three Phases. These Phases are called Mine, Draw and Action. Turns are taken in a cLockwise direction of play starting with the player left of the dealer.

Target cards for Attack by either placing your Attack card near it or pointing to it so that all players can see.

When an Exchange has three Bitcoins Stored on it at the end of a Turn, it Locks. Locking means that for the rest of the Game; they cannot be Targeted for Attacks and the Stored Bitcoins cannot be Drawn.

The Game starts when the deck is shuffled and ends when the last card is Mined or Drawn.

Playing To The Moon means playing multiple Games with the winner or winners of each Game taking a Moon Token.

Once you understand Bitcoin Empire; you may wish to include some bonus rules to speed up the Game and make it more fun.

Decide which bonus rules you want to include before the Game begins and place the cards face-up next to the deck.

Attacked players may counter-Attack either by playing an Attack card or by Revealing a Skullduggery card from their hand. Attacks chain together.

This rule does not apply to Head Hunter Attacks.

If you have all three Internet Meltdown cards somewhere in your hand or as Learned Skills or in a combination of these two locations; you may in your Action Phase declare to all players “Nakamoto Obliterate”, Reveal your hand and instantly win the Game.

When you resolve a successful Attack; you may instantly resolve the function of your acquired card. That is to say you may build the Exchange or Learn the Skill rather than putting the acquired card into your hand. 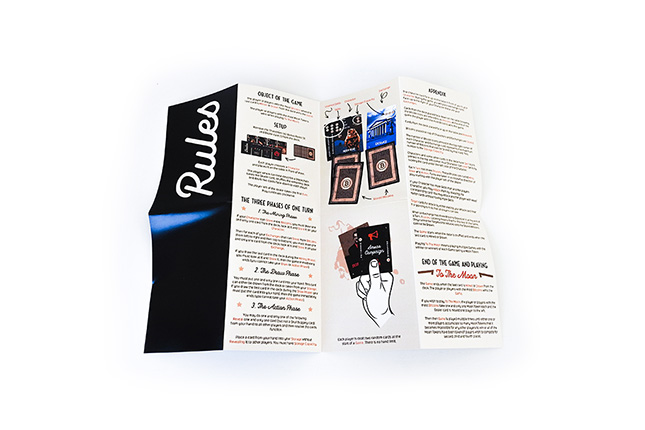 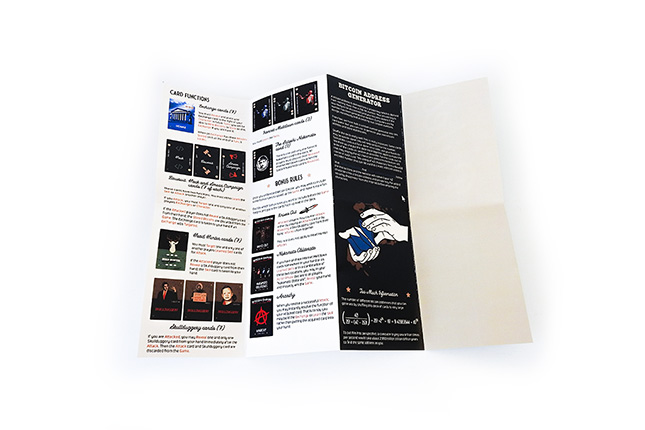